Killer In The Crowd – Carte Blanche

Killer In The Crowd – Carte Blanche 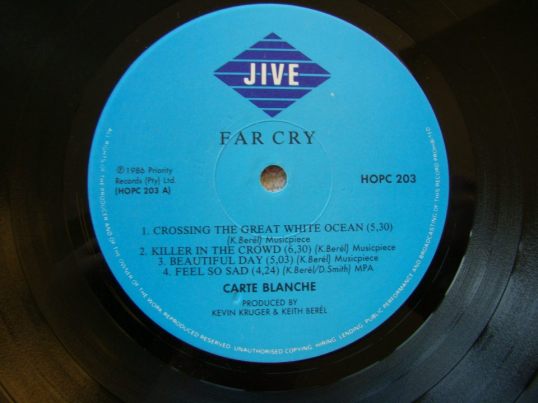 After Flash Harry disbanded, Keith Berel went on to form Carte Blanche (2 years before the TV show of the same name hit your sceens) with Dieter Smith. They called in Kevin Kruger to produce their only album ‘Far Cry’ which spawned two magnificent singles – ‘Walk Away’ and ‘Killer In The Crowd’.
The story goes that to get round the SABC censorship, Berel submitted slightly adjusted lyrics to the actual ones, for their consideration, changing the line “I’m just a policeman, a martyr in blue” to “I’m just a please man, a tomato in blue” (from ‘Censorship & Cultural Regulation In The Modern Age’ edited by Beate Müller). This was because, in 1986, the SABC did not like policemen being mentioned in songs.

‘Killer In The Crowd’ is a juggernaut of a song. Staring with its dramatic guitar chords and ominous drums, it tumbles into a full on rock pop song that hurtles along, Berel’s voice bouncing in the cab, while the guitars and drums pound the tar. The whole thing is heading into the heart of a burning 1980’s township. But strangely the message being screamed from this hurtling machine is the message “Stop the fighting”.

The trick of the lyric sheet meant that ‘Killer In The Crowd’ managed to get some airplay, but not enough to propel it into any of the local radio station charts.

Where to find it:
Singles bins or a vinyl or cassette of ‘Far Cry’