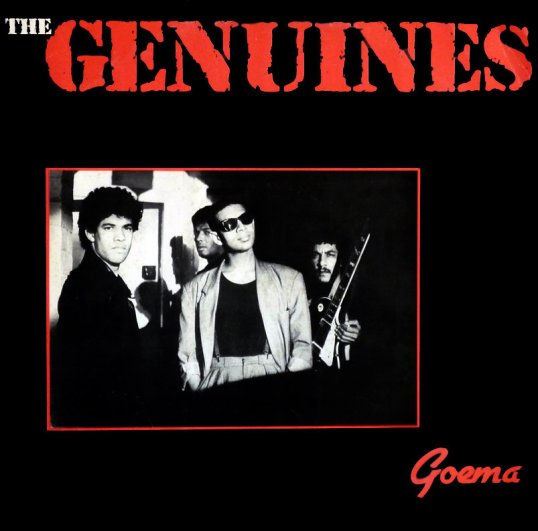 There came a time in South African music when Afrikaans musicians were breaking free of the shackles of sugar candy coated music that sang of innocent things, and began to rock and sing of things political. This was the Voelvry movement. Slightly lost in this ‘Afrikaans’ revolution was a Cape Coloured band called The Genuines. Led by Samuel ‘Mr Mac’ McKenzie on banjo, this band were doing a similar thing with the traditional music of the Cape Coloureds. And in ‘Goema’, the title track of their debut (I think) album they really broke the mould.

‘Goema’ is a thrashy, punky piece that races along at a blistering pace (completely out of sync with life in the Cape) with Gerard O’Brien’s searing guitar trying to out pace Ian Herman’s (he of Tananas fame) machine gunning drums while Mr Mac’s throaty vocals cascade over the top of this. It last a mere 3 minutes this song, but it would take some stamina on the listener’s behalf to cope should the song be longer as it leaves you quite exhausted.

Parallel’s could be drawn with The Pogues and Les Negresses Vertes who took the traditional music of their respective cultures and punked it up. The Genuines did this with their ‘Cape Carnival’ style of music with 2 of their songs appearing on the original Voelvry album (‘Blikkie Se Boem’ and ‘Ou Klein Jannie’). With ‘Goema’ they took things a step further and nearly did away completely with any traces of their roots – there is just a trace of the Cape Coloured accent in the vocals – and stepped out of their comfort zone to give us probably the best punk song ever by a band of Coloureds.