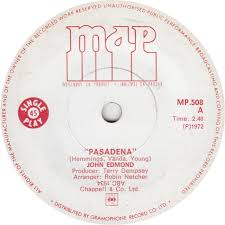 During the Second World War, it was Tipperary that was such a long way to. With inflation and all that followed, by the time we came to 1972 it was a long, long way (that’s double the amount of longs) that one had to travel and this time it was to Pasadena. For someone in South Africa (or Zimbabwe where John Edmond spent part of his life, or even Zambia where John was born), Pasadena was certainly further away than Tipperary (which is in Ireland in case you didn’t know).

However for John Paul Young (who sang the original of the song ‘Pasadena’) Tipperary would have been a long, long way from his native Australia while Pasadena (near the west coast of America) would only have been a long way.

Despite the distances one would have had to travel, John Edmond would make the trip easier with this little ditty. His version is a smooth, easy going one which has a slight country tinge to it, helping you to sit back and enjoy the ride. On the other hand John Paul Young’s version would give you a bumpy reggae beat tinged ride. Its up to you to chose which one to have on your playlist for the journey.

‘Pasadena was Edmond’s 4th SA top 20 hit which would make number 5 and spend 17 weeks on the chart, thus performing better in SA than John Paul Young would in his native Australia as he only managed to get to number 16 there with his version.

Where to find it:
Singles bins