Archive for the tag “Ten Tons Of Loving” 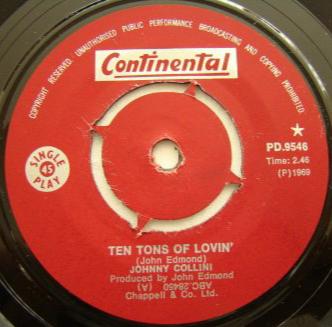 Ten tons is pretty heavy, but this song was not. Released in 1969, Johnny Collini makes light work of this John Edmond composition. With the composer also taking on the production ‘Ten Tons Of Loving’ is one of those pop songs that Cliff Richard or Herman’s Hermits perhaps would have taken into the charts in the middle to late 1960’s. It’s a lighthearted song about the huge amount of love the singer has.

Collini, who was born in Heidleberg and sang in The Zombies (no not the UK band featuring Colin Blunstone and Rod Argent, but the South African one that morphed into Four Jacks & A Jill), brings a strong vocal to the song and with his voice being brought right to the fore, the instrumentation seems almost muted against his big voice.

‘Ten Tons Of Loving’ did not make the Springbok charts (only his hit ‘That’s Why God Made The World’ managed that), but was a popular tune in its day. Collini went on recorded a number of singles, but as far as we know he never released an album. With its title being what it was, one could regard the song as being about a Whole Lotta Love. Hopefully that last comment doesn’t go down like a lead balloon.