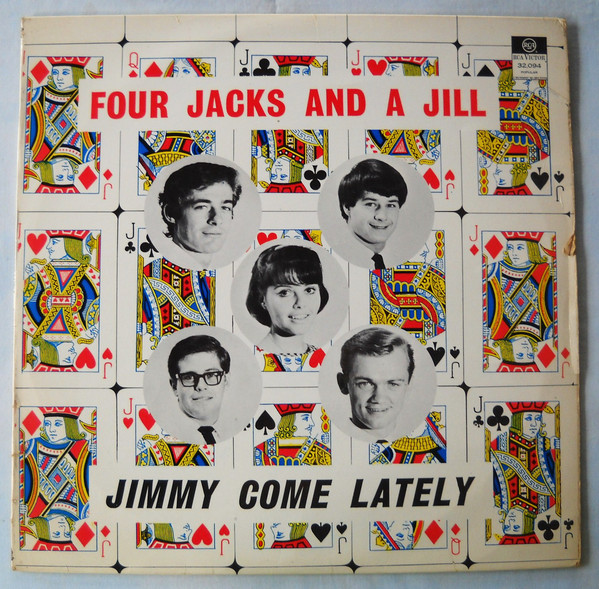 Four Jacks & A Jill have been one of the longest surviving groups to come out of the South African music scene. They formed in 1964 and still occasionally perform. A couple of years after getting together, they saw their first Springbok Top 20 success with ‘Jimmy Come Lately’, a cover of ‘Ginny Come Lately’ which was a US number 21 hit in 1962 for Brian Hyland.

Ginny had a sex change, presumably because Glenys Lynne, the lead singer for Four Jacks & A Jill, was a female, while Brian Hyland was singing about his girl. So Ginny became Jimmy. And Four Jacks & A Jill speed up the song slightly as Hyland’s version is like a slow stroll along the promenade, while Four Jacks and A Jill skip through a field with Jimmy. This song set the tone for all their hits that were to follow. There is the purity of Glenys Lynne’s voice, the 60’s pop sensibilities in the instrumentation and an overall feeling of all things good. It is honey in the shape of a 7” single. Even the short organ interlude in the song keeps things sweet without being sickly so. It also does not venture into the more psychedelic direction that Hammond organs were taken in around that time.

The song would get to number 2 and spend 12 weeks on the Springbok charts, which was an excellent start for a band which would go on to be the top performing local artist on the charts in the 60’s (they ended up being the top performing group by the time the charts ended, but were beaten by Barbara Ray, Alan Garrity and Billy Forrest). It is a little ironic that ‘Jimmy Come Lately’ came early in their career as usually things that come late miss out. But for Four Jacks & A Jill, they did not miss out and in the words of another woman with a voice of honey, Karen Carpenter, they could well have sung, We’ve Only Just Begun’.