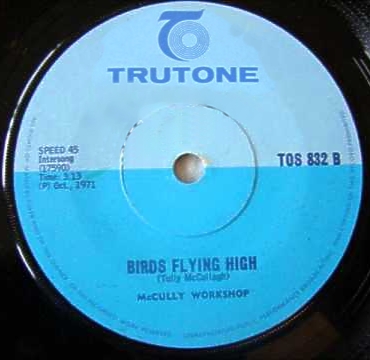 A couple of years after McCully Workshop first burst on to the scene with their hit ‘Why Can’t It Rain’, they released a single called ‘Rainbow Illusion’. While the a-side of that single didn’t seem to bother the charts, the b-side climbed up to number 6 on the LM Radio charts (some sources say it only got to number 9). You can find ‘Rainbow Illusion’ as a bonus track on the CD re-release of their 1975 album ‘Ages’ while we had to wait till 2005’s ‘The Best Of’ CD to hear the b-side, a song called ‘Birds Flying High’, in the digital era and even then it wasn’t the original, it was a 1998 re-recording. Fortunately, a year later those wonderful guys at Fresh Records put the original 1972 version onto their excellent ‘Astral Daze’ compilation.

When one starts listening to ‘Birds Flying High’, and especially the 1972 version, one can hardly believe this is McCully Workshop, particularly if, like me, your first introduction to the band was ‘Buccaneer’, as there is a kind of jazzy flute intro underpinned by some cocktail lounge piano, or in the later version it is the piano at the fore and the flute in a supporting role. The vocals that arrive soon after this are dreamy and somewhat floaty a bit like…well, a bit like birds flying high, drifting around a warm blue sky.

This feeling pervades throughout the song as it glides around your head, occasionally soaring as the chorus swells on an updraft as the backing vocals join in and it drifts across from this jazzy folk into more rock territory. This is particularly marked in the 1998 version where the chorus is accompanied by a far more prominent guitar sound more akin to the ‘Buccaneer’ and ‘Why Can’t It Rain’ sound of the McCully’s catalogue.

Both versions are a good listen. The earlier one has shades of the Otis Waygood Blues Band to it, while the latter updates the sound with a more modern production, but does not lose the sense of freedom that a bird in the sky has. This may not have been a favourite of McCully fans, but it certainly made an impact on those at the old LM Radio and on Benjy Mudie and Brian Currin as they compiled the ‘Astral Daze’ CD. So stick either version on and get that Voelvry feeling from a pre-Koos Kombuis/Bernoldus Niemand/Johannes Kerkorrell era.