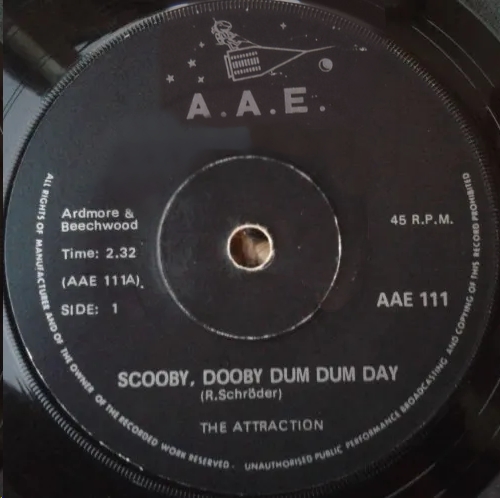 Hands up who remembers scooby wire? For those either too old or not old enough, scooby wire was thin coloured wire that one knotted and platted and wound around other wires to create bracelets and such like. Well that was a craze around the time that The Attraction’s ‘Scooby Dooby Dum Dum Day’ was a hit (1971). I can’t say for sure if Robert Schroder who wrote the song, had this in mind when he was composing, or if he had been watching the Scooby Doo cartoons or if he just thought that ‘Scooby Dooby Dum Dum Day’ would make a good title for a bubblegum hit.

The song had the honour of being one of those to appear on the very first Springbok Hit Parade albums (which were compiliations of contemporary hits covered by session musicians). The series of those albums went on to become somewhat iconic, with most of the youngsters of the time (myself included) not realising that these were covers of the big hits of the day.

‘Scooby Dobby Dum Dum Day’ is a pleasant slice of bubblegum pop with a similar beat to The Archies’ ‘Sugar Sugar’ (possibly the mosy successful bubblegum hit of all time). It features the gentle, bordering on falsetto vocals of Neil Herbert who had a Springbok Top 20 number 1 hit with ‘She’s A Woman’ in 1974. It also featured Robert Schroder on keyboard. Schroder would see 6 hits where he had writing credits make the Springbok Radio charts although, sadly, ‘Scooby Dooby Dum Dum Day’ would not be one of them.

Despite its lack of chart success, it obviously had enough popular appeal for it to appear on the Springbok Hit Parade collection and I am sure it is one that for a number of people it will be a song that brings back memories (probably accompanied by a smile) and have us all thinking, ‘why don’t they ever play that one on the radio anymore?’

Where to find it:
Singles bins if you’re lucky