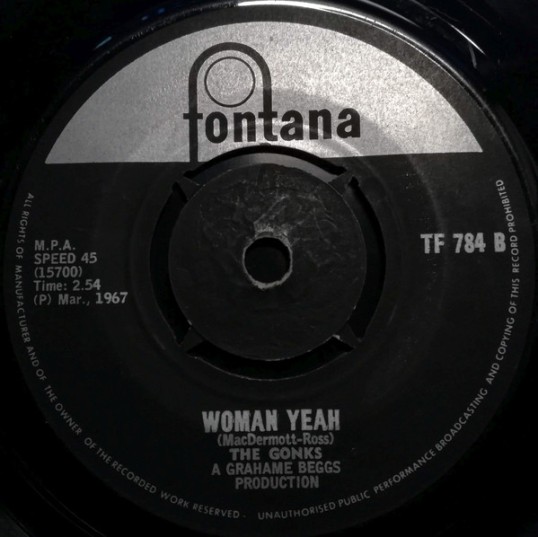 The Gonks hailed from Durban and were the backing band for Billy Forrest (who was going under the name Quentin E Klopjaeger at the time) on his single ‘Lazy Life’. The mainstay of the band in its early line up was a guy called Howard Schachat who was the guitarist for the band. He had been in a band called Invisible Church before that.

The Gonks only made a few singles and then disappaeared, but one of those singles was ‘Nobody But Me’ which featured as its b-side ‘Woman Yeah’, a fuzzy garage-ey piece of rock pop from 1967. It has an insistent guitar riff that drills itself into your head going round and round while the vocals come across as a little bit soul, a little bit punk and a little bit rock ‘n’ roll, giving it an interesting effect.

The track was written by band members Noel McDermott and Craig Ross, the latter eventually moving on to be part of Freedom’s Children. Grahame Beggs (who was one of the main members of Charisma who had a massive hit with ‘Mammy Blue’) produced the tracks.

There is not a lot of Gonks material available and what is out there is hard to find but the chaps behind the excellent ‘Astral Daze’ series decided that reviving an old Gonks b-side for the second compilation was a good idea and I for one agree. This is great stuff from what would be a lost era of SA music if we didn’t have the archive trawlers that we are fortunate enough to have. I found a copy of ‘Nobody But Me’, the a-side of the single on Youtube and its not bad, but I think the Astral Daze dudes chose right with going for the b-side.

Posted by musicstats in 1001 Songs and tagged Billy Forrest, Grahame Beggs, Nobody But Me, Quentin E Klopjaeger, The Gonks, Woman Yeah