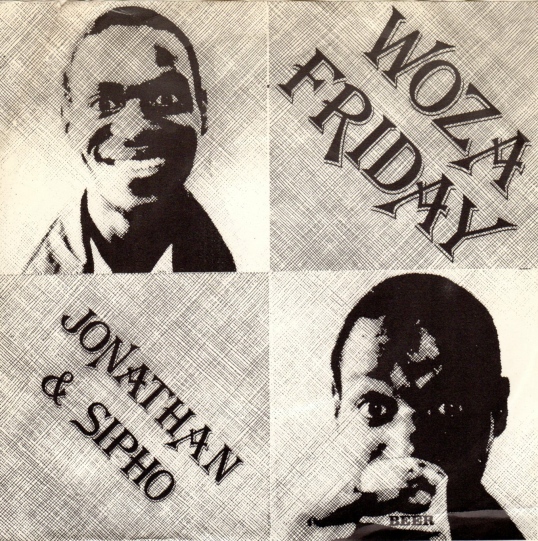 Way back in the day, before Juluka was invented, a guy called Jonathan and another called Sipho recorded a song called ‘Woza Friday’. Later on, when Juluka came into being, the band recorded a cover of that early Jonathan and Sipho track. Of course, you will all be telling me that Jonathan and Sipho were Juluka, so what the hang am I on about. Well, yes, the Jonathan and Sipho in question were Jonathan Clegg (Johnny to his fans) and Sipho Mchunu who were the mainstay of Juluka. However, in 1977, before they became famous, they released a single called ‘Woza Friday’ under the name Jonathan and Sipho. It was only the following year that they released the seminal album ‘Universal Men’ under the name Juluka and it took 5 years before ‘Woza Friday’ had an outing under the Juluka brand name when it appeared on their ‘Ubuhle Bemvelo’ album.
That early 1977 recording of the song was a beautiful rough diamond. It has that sort of urgency and racing quality of township jive with a natural rhythm allowing one to visualise Johnny doing that dance where he skitters to one side then the other. It also features a more prominent vocal from Sipho and was a joyful introduction (which most of us never heard) to what would become one of the most important bands the country has ever seen. The later version has 5 years of experience to draw on and is a more polished one, showing off Johnny’s western rock sensibilities.
However, both versions are life affirming affairs and how can they not be when they sing ‘Woza, Woza Friday, my darling’ (‘Come, come Friday, my darling’). The lyrics tell of the hardships of work, the yoke of poor wages, but the joy that arrives with Friday and the weekend. It’s time to party and enjoy life, freed from the shackles of work. How can a song about this subject not brighten anyone’s day?
The Easybeats sang about ‘Friday On My Mind’ (a cover by the band Chilly made the Springbok charts), the Cure said ‘Friday I’m In Love’, the Specials had a song called ‘Friday Night, Saturday Morning’ and in 2011 Rebecca Black became a Youtube sensation with her song ‘Friday’. All of these look at the one workday a week when life doesn’t seem so bad.

Jonathan and Sipho tapped into that great ‘Friday Feeling’ and put it to music in a way that has you jiving round the office, or shop floor, or down in the mine or wherever it is that one may work. We all love Fridays, in fact we sometimes give thanks to God for the day like it is some sort of divine gift. A listen to ‘Woza Friday’ (either the 1977 or 1982 version) does feel like you are listening to something God given. Thank God for Fridays, without it we would never had had this song.