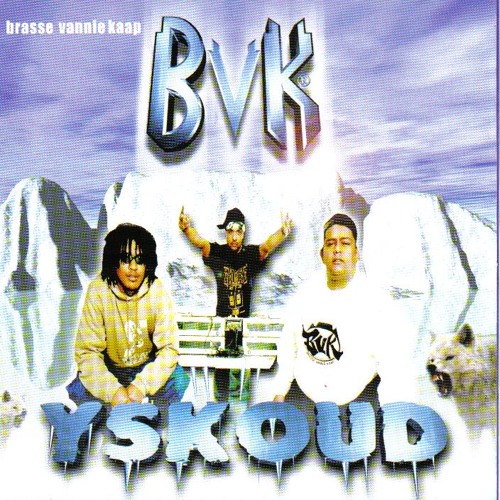 Before Brasse Vannie Kaap, we didn’t really have much by way of successful rappers in South Africa and certainly almost none that rapped in Afrikaans and, as far as I am aware, none that rapped with a kleurling accent. So its hard to argue with people saying that they were ground breaking.

They came to prominence in 1997 with the release of their eponymous debut album, ‘Brasse Vannie Kaap’ and this fame continued with the release of their second album ‘Yskoud’ which included ‘Cape Flats’ and was released in 2000. The song must have been influenced by the fusion of hard rock and hip hop which songs like Run DMC’s collaboration with members of Aerosmith on their 1986 hit, ‘Walk This Way’ had successfully managed. There is a hard-edged guitar growling throughout the song while the lyrics are delivered in an angry voice that at time borders on threatening. But there is an almost catchiness to the chorus when the band join in and you can almost hear them jumping around (like they do in the video below) as they blast out the sound.

Brasse Vannie Kaap along with fellow Cape band Prophets of da City led the way for acts like Die Antwoord and Jack Parrow to follow. In 2002 a compilation album called ‘Vloek Van Die Kitaar’ brought together some of the most influential Afrikaans rock songs that had been released up till then. It featured some of the Voelvry movement acts and a number from the burgeoning Stellenbosch blues scene, but also included ‘Cape Flats’ which, while being at odds with the other tracks in terms of its sound, was also given the nod as a very influential Afrikaans song.