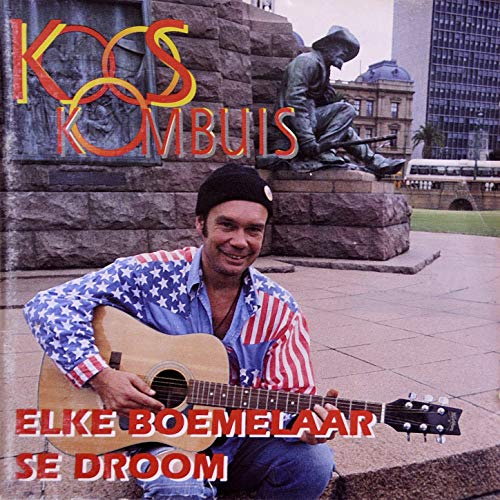 I know I’ve already featured this song on this list, but that first entry was the superb cover by Frank Opperman. This time round we’re looking at the Koos Kombuis original. Except which version of the original to listen to. There’s the original original on the 1994 ‘Elke Boemelaar Se Drooom’, there’s a live version on the 2000 live album ‘Blou Kombuis’ and there is a re-working of it on 2008’s ‘Bloedrivier.

Well, I guess, the starting point has to be the original original. This is actually a pretty ordinary version which is sort of soft rock with some pleasant guitar licks. The live version is a bit grittier, mainly because of the rawness of Koos’ vocals. The ‘Bloedrivier’ version is somewhat different as there is a subdued intro which hinted at Koos retiring from the music scene with its lines ‘Jy’t gesê jy wil ‘n break vat’ (‘You said you wanted to take a break’) and ‘dit is tyd vir sabbatical’ (‘it’s time for a sabbatical’). But in the end he didn’t. However, this almost whispered first section of the song, doesn’t last too long before a harder edged rock version assails your speaker. The song is still the same old Johnny, but on this outing he rocks a lot more.

But like artists such as Bob Dylan and Leonard Cohen, its not so much the delivery that’s important, it’s the words that are where we should be focusing. This story of Johnny, presumably a drug addict of sorts, struck a chord with a lot of people as most know someone with a drug problem. Like the Johnny who called the Chemist a decade before him, this Johnny will also remain an important figure in the history of South African rock music.

One thought on “Johnny Is Nie Dood Nie – Koos Kombuis”