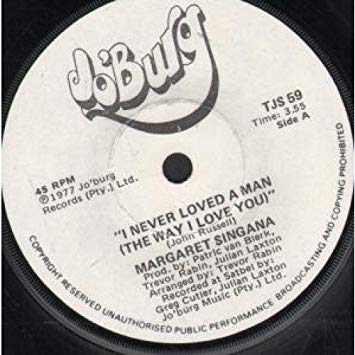 Yes, I know Aretha Franklin also did a song called ‘I Never Loved A Man (The Way I Love You)’, but hers is a breathy, soulful song written by Ronnie Shannon. Margaret Singana’s is a completely different song, written by John Russell and produced by Patric van Blerk, Trevor Rabin and Julian Laxton. And with that production team, you know you’re going to have a great song.

‘I Never Loved A Man’ (Margaret’s one) was first seen, as far as I can tell, in 1977 when it was released as a single and included on her ‘Tribal Fence’ album. It has an early disco bounce to it that would have enticed most on to the dancefloor back then for a little boogie. It’s got a funky bass, a thumping beat interwoven with some 70’s rock guitar. All of this underpins Margaret’s strong vocals.

The song made it on to the Springbok Top 20 where it managed 18 weeks, spending 3 frustrating weeks at 3 while Heart’s ‘Barracuda’ and McCully Workshop’s ‘Buccaneer’ battled it out for the top 2 spots, then eventually made it to number 2 for a week on 13 January 1978, but was denied the top spot by ‘Barracuda’. This would be her most successful effort on our charts and also the best performance for the 3 producers with the exception of van Blerk who eventually saw a number 1 hit as producer with Joy’s ‘Paradise Road’. I guess one could say that We never loved a song (produced by Patric van Blerk, Trevor Rabin and Julian Laxton) the way we loved Margaret’s ‘I Never Loved A Man’.

2 thoughts on “I Never Loved A Man – Margaret Singana”