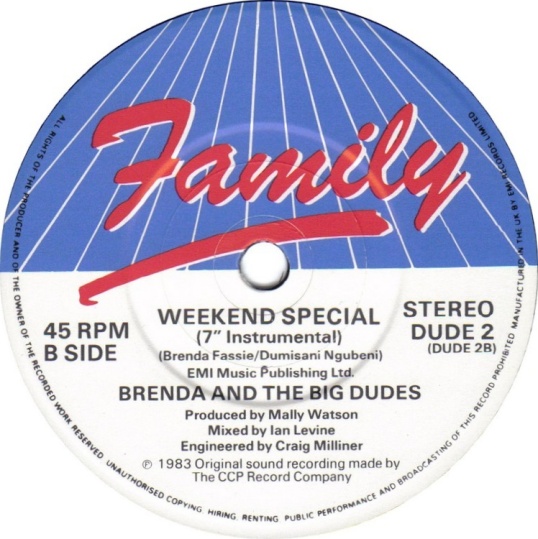 When the 80’s were still relatively young, South African music had taken the synth driven Funk and New Romantic music and blended it with our own ‘township’ sound. Acts like Hotline, eVoid, Sipho ‘Hotstix’ Mabuse and Steve Kekana were getting plenty of airplay. Although they didn’t get as much airplay as the aforementioned (as far as I can recall), Brenda & The Big Dudes’ ‘Weekend Special’ went on to become a landmark song. Probably more from the fact that it brough to light the talent of Brenda Fassie (the Brenda in the band’s name in case you were wondering).

‘Weekend Special’ has less of the ‘township’ sound to it than some of the acts mentioned above. It has more a straightforward 80’s R&B sound that was similar to what we were hearing from American acts such as DeBarge, Stephanie Mills and Ashford & Simpson. It got people on the dancefloor with a funky groove and a bright vocal from Brenda.

Listening to it now, it does feel a little dated and is probably not the best of its genre, but it is an important part of South African music history as it was the springboard from which Brenda Fassie launched her illustrious career. Brenda was voted the 17th Greatest South African in the SABC programme ‘Great South Africans’ back in 2004 so its always worth digging into history to find out how the greats started out.