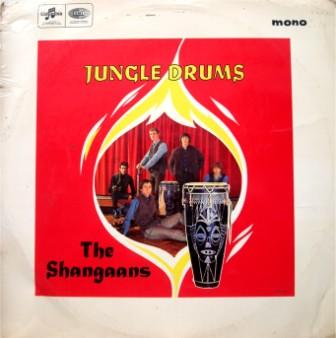 Now here’s a strange one. This is a band named after an African tribe, but made up of white guys. And on top of this they are perfoming a cover of a song written by a German guy who was trying to make music that sounded African.

The Shangaans were a 5 piece South African band whose line up included Grahame Beggs (who had great success with his band Charisma), Alain D. Woolf and a guy called Glen Muller (one wonders if they were ever tempted to call themselves the Glen Muller Orchestra). ‘Afrikaan Beat’ was a cover of a track by Bert Kaempfert who had had some internation success with his ‘African’ styled music. The local lad’s version of it appeared on their album ‘Jungle Drums’ which garnered some international interest and was released in The UK, Germany, Australia, France and Spain and probably a few more countries.

The Shangaans substituted the trumpet that Kaepfert used to carry the tune with a penny whistle type keyboard sound and while it lacked the warmth of the brassy version Kaempfert produced, this gave the song a more home grown feel as it trips along merrily, dragging tapping feet in its wake. There is an innocence to the song which gives it a 50s feel despite it being released in 1965. But it is this bright and breezy pop feel that gives the tune its appeal.