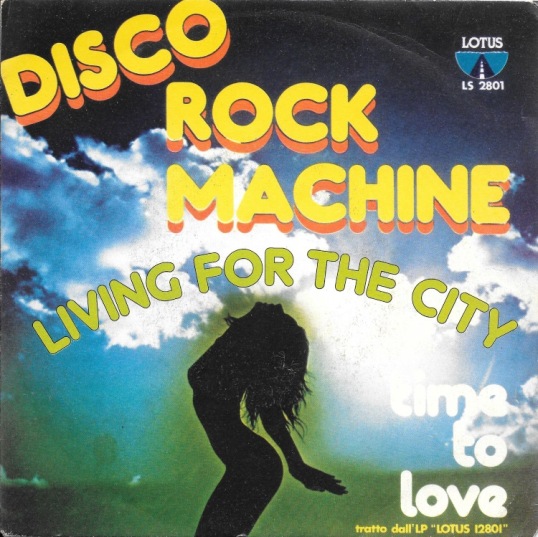 When Stevie Wonder recorded ‘Living For The City’ it was a slick and funky song. When Disco Rock Machine got hold of it, they turned it into a rocking, floorfilling, stomp-a-thon with a killer female vocal that grabs hold of the song and shakes it by its commuters. While Wonders version is silky and somewhat laid back, rather like a drive through the suburbs, Disco Rock Machine’s version struts down a busy Wall Street, head held high.

As the band’s name suggests, they combined the burgeoning disco sound with a rock sensibility to create a hard-edged song that you can dance to. But who were the cogs in this machine. Well, the names of this studio outfit should ring a few bells as we had none other than Trevor Rabin (Rabbitt and later Yes in case you’ve been living on another planet for the last 40 years) on guitars and keyboards while Kevin Kruger (possibly better known for his production work) on drums and a certain Rene Veldsman (she of Via Afrika fame) providing those powerful vocals. It is quite difficult to picture the voice on this song going on to give us the earthy, ethnopunk of ‘Hey Boy’ which is a credit to the vocal versatility of Veldsman.

The band would also record a cover of Stevie Wonder’s ‘Higher Ground’, but would not find any success on the Springbok Charts, perhaps it was lines like ‘To find a job is like a haystack needle/Cause where he lives they don’t use colored people’ from ‘Living For The City’ that put the old SABC off giving this cover version a good run in the public’s ears. However, you can get to hear it now if you can lay your hands on the ‘Disco Fever’ CD, otherwise, there is always Youtube.

Posted by musicstats in 1001 Songs and tagged 1001 Songs You Must Hear Before You Die, Disco Rock Machine, Kevin Kruger, Living For The City, Stevie Wonder, Trevor Rabin, Via Afrika, Yes