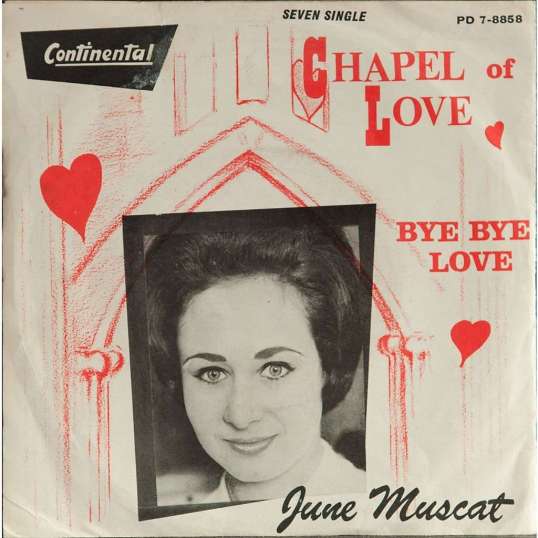 The Chapel of Love is one of those Las Vegas places when you can rock up and get married on the spur of the moment. Apparently this one also offers (or used to offer) a drive thru service. It is therefore quite fitting that when Dan Hill was fretting about the fact that the vocalist who was meant to sing on the version of ‘Chapel Of Love’ they were recording hadn’t turned up (was she in a drive-thru somewhere?). June Muscat was working as a secretary at G.R.C. (aka Gallo Record Company) and happened to walk into the studio at that time. Dan Hill immediately married her to the song and it became a huge hit for her in 1964.

The song was a cover of the well know tune which was first made famous by The Dixie Cups and also recorded by Darlene Love as well as The Ronettes. Listening to these versions by those luminaries of US soul and then comparing it to June’s version, the one thing that struck me was how much to the fore June’s vocals were pushed. While there is nothing wrong with the other versions, its worth checking out June’s one purely for the strength of her voice which rings out like a chapel bell over a warm, brassy and funky sound.

It is always difficult to compare different versions of the same song, especially when people have a favourite version, or stick to the one they first heard, but for many South Africans this may well be their version and it is easy to see why they would stick to this one as it is a strong cover of the song which was probably played at many a wedding in the country during 1964 and, I’m sure, for a good many years thereafter.

One thought on “Chapel Of Love – June Muscat”