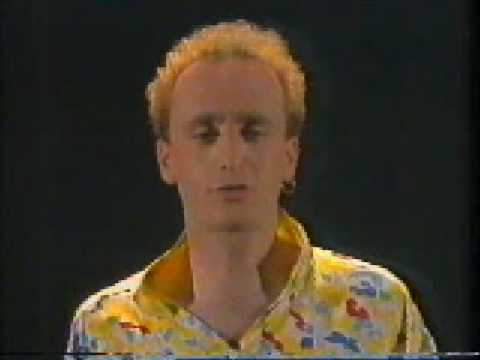 ‘Everybody’s trying to be a superstar/But nobody knows what for’. So sings the one time singer with Ballyhoo. The ironic thing is that he does it in what we would nowadays refer to as an Idols/X Factor voice. Not only does he do the voice, but it is one of those songs competitors in the aforementioned competitions would have no problems singing (or attempting to sing as the case may be.)

The thing with Irving is that he does it so well with this song. He does have a great voice (although he wasn’t the voice behind ‘Man Of The Moon’ – he joined Ballyhoo just after they recorded that) and the song is a solid (bordering on power) ballad. Irving puts a lot of emotion into the performance and it paid dividends as the song made it to number 6 on the Radio 5 charts in 1985 and it was included on Ballyhoo’s 1989 album ‘Alive’.

Despite the pleading note in Irving’s voice, the answer is quite simple. People want to be superstars for fame, money and (in the case of male rock artists) to pick up chicks, although they may not necessarily be in that order. Ballyhoo were Superstars in South Africa and in putting out this solo effort, Stewart Irving enjoyed his 15 minutes (or 6 weeks according to his Radio 5 chart run) of superstardom.

Where to find it:
Various Artists – Sharp Cuts Vol 1