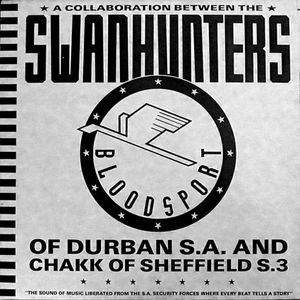 Okay, I’ll admit that this one does cheat a little as Chakk were a band from Sheffield in England who had some success on the UK Indie Charts and worked with Richard H. Kirk of Cabaret Voltaire. But it was this unlikely pairing of this UK industrial funk band with little known South African band called The Swanhunters that we are interested in here.

How did the two bands come together? Who where the Swanhunters? And with the cultural boycott of South Africa in full swing in 1986, why did Chakk risk collaborating with the Swanhunters? These are questions I do not have the answers to. From somewhere is a dusty compartment of my memory I remember first hearing this track on Barney Simon’s Powerhaus show on Radio 5 and there was some mention of The Swanhunters hailing from Durban. This was confirmed when looking at the cover of the 12” single of the songs as emblazoned across it was the message “A collaboration between the Swanhunters of Durban S.A. and Chakk of Sheffield S.3”. This answers to a small degree the second question above.

The third question is perhaps answered in the first line of the song: “You’ve lost the will to live a township lie on a burning wasteland” and the politically charged message that encircles the back cover. It was without a doubt an anti-apartheid (and a whole lot more) song which has the lead singer sounding as if they are shouting protest slogans through a megaphone agains a hail of machine gun beats which you can dance to. Not the toyi-toyi dance, this is not black protest, it was whites protesting against an environment of their own creation as well as the part the international community played in supporting it.

For most of you familiar with the music of Cabaret Voltaire, you will be familiar with the sound on this record as it is very reminiscent of them and actually quite difficult to believe that a South African band was involved in this project as I am not aware of any other local group to embrace this dance sound (forgive me if there are any, I just never got to hear you).

So questions two and three are answered, but I have no answer yet to question one, and I have a further question relistening to this song – how the hell did Barney manage to get to play this on the SABC?

Where to find it:
Maxi singles bins

One thought on “Bloodsport – Swanhunters & Chakk”