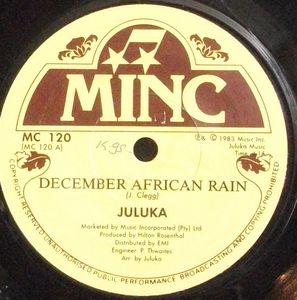 One of the set works I had in English at school (a long time ago) was a book called ‘I Heard The Owl Call My Name’. So when Johnny Clegg and Sihpo Mchunu came along singing about December African Rain and ‘I hear the owls calling my name’, I had some idea of what the song was about. The book was set in British Columbia where the native Kwakwaka’wakw people believed that if you heard the owl call your name then death was imminent.

But Juluka were not about to die. This was 1983 and they still had a few more years in them yet. However, the song is about a person facing their demise, but it is not a morbid farewell he is saying to the world. He is accepting of his fate as a natural progression. Yes, there are some regrets – “where did the time go?” and taking leave is not easy – “It’s so hard to say goodbye to eyes as old as yours my friend”, but we are told to “wipe away those tears and remember the good times”. This is a much more upbeat song for a funeral than the dirges we usually have. It celebrates life rather than mourning the loss of it.

‘December African Rain’ was one of those rare things, a Juluka chart hit. It got to number 7 on Capital 604’s chart and 15 on Radio 702. In amongst all the imagery and ‘Yum-um-um-um-bo’s’ there is one line that stands out for it pure beauty and imagery and that is, ‘The firelight has danced its last across your face my friend’. That may well have been the case for the friend, but for the song, I am sure it will be a long time before it dances it’s last across your sound system.