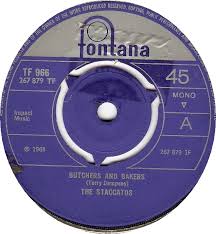 And just what did those Candlestick makers do to be left off the title of The Staccatos number 7 hit of 1968. Sure, they get a look in in the lyrics, but no headline billing. I was going to shed some light on this, but there was some load shedding and where are those candles I ordered…?

The Staccatos knew how to make pop records. They hold the record for the longest run by any song on the SA Top 20 (38 weeks by ‘Cry To Me’ in 1969 and 1970), but only managed 10 weeks with this little ditty. There is a catchy tune around which Brian le Gassick wraps his soulful vocal chords. He is helped out by a chorus of backing singers in that big sound 60’s style. There are also some brassy bits thrown in for good measure on a sing-a-long song that brings up visions of housewives tapping their toes to this song on the radio while doing the ironing. (Not that one wants to be sexist about this, but that is the sort image that would accompany this style of song in films from that era – and usually the woman would be in curlers.)

But this is no longer the 60’s and the ironing is no longer just the woman’s job, so that can’t stop people (of any gender) enjoying this song and tapping you feet along to it while listening to it on your iPod. This is a prime cut of a song, warm and fresh and (so that the Candlemakers don’t feel left out) one that you can wax lyrical about.

Posted by musicstats in 1001 Songs and tagged Butchers And Bakers, Staccatos

5 thoughts on “Butchers & Bakers – The Staccatos”