My Kind Of Girl – Cinema 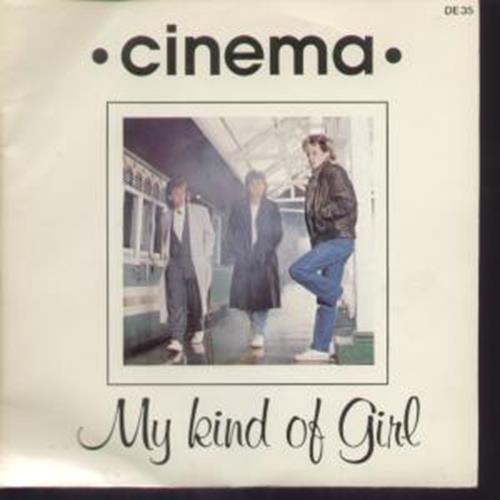 My Kind Of Girl – Cinema

In 1987, Cinema were the band to watch. They were going places with bright and breezy pop full of saxophones and keyboards and they had a snappy dress sense and…mullets!!! Of course the mullet was poular back then, especially if you wanted to make it in the music world. Who knew that it would become a hairstyle of ridicule years later?
Despite the dodgy hair, ‘My Kind Of Girl’, which was most people’s introduction to this new band, was as poppy as you could want. There is a bouncy danceable rhythm and a strong vocal performance (unlike today’s boybands, back then, you didn’t have to sound like you were in huge amounts of pain and distress in order to attract the girl’s attention). Written by band members Chris Frank and Alan Lazar, lead singer Jarrod Aston, brings the song to life and it remains one of the standout pop tracks from the second half of the 80’s.
‘My Kind Of Girl’ charmed it’s way to number 6 on the Springbok Charts, pretty-boyed  to number 9 on the Radio 5 charts, sharp dressed itself to number 2 Capital 604’s charts, and mulletted a number 1 spot on the Radio 702 ones. Yes, there was a lot of image going on around the band, but as the styles back then are no longer popular, you have to look at the song itself without the posing and it stands up to the test of time.
Where to find it:
Various Artists – The Best of SA Pop Volume 2 (1994) GMP, CDGMPD 40486 (CD)

Posted by musicstats in 1001 Songs and tagged Cinema, My Kind Of Girl, South Africa, Springbok Charts

3 thoughts on “My Kind Of Girl – Cinema”