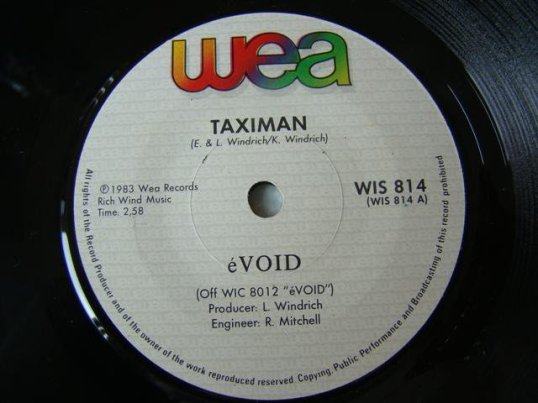 The main force behind éVoid were the Windrich brothers Erik and Lucien. And behind the massive hit ‘Shadows’ there was the little brother ‘Taximan’ a song which has had to live in the, erm, shadow of it’s big brother all these years. Had they not written ‘Shadows’ éVoid would have always been remember as the band that brought you ‘Taximan’.  There may be some out there who prefer this younger brother to the older statesman hit and that is perfectly acceptable because, well, ‘Taximan’ is such a brilliant song in its own right.

The song itself is a bit like a taxi ploughing its trade between Soweto and Jozi. It’s overloaded with great ideas, it doesn’t obey the usual rules but choses to plough its own furrow, there is a great dance beat booming away, someone is leaning out the song shouting ‘heya!heya!’ and then it comes to an abrupt stop without much warning.

‘Taximan’did not fare (no, not what you pay for the ride) quite as well as ‘Shadows’ but reached a respectable 6 on the Springbok Charts in comparison to the latter’s 3. That said, it did manage number 3 on the Radio 5 charts where ‘Shadows’ stalled at 4. One can just imagine the sibling rivalry that went on in the LP sleeve way back when. Both songs have grown up and matured, yet both sound as vibrant and youthful as they did in 1983/4. So come out of the shadows for a bit, head out on that highway and head into town with the most loveable ‘Taximan’ in South African musical history (with Karen Zoid’s ‘Taxi’ coming a close second).