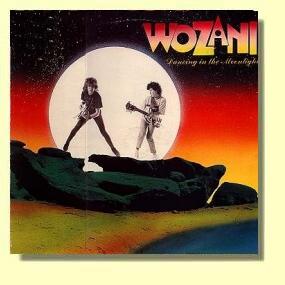 George van Dyk, the driving force behind Wozani was a one time bass player with Hotline who, strangely enough, produced an album called ‘Wozani’ in 1985. Other members of the band included ex-Zia (a band that Clout’s Cindy Alter fronted) personnel Graham Clifford, Abe Sibiya and Bheki Gumbi. Wozani’s only output was an album released in 1990 called ‘Dancing In The Moonlight’ and the title track opens the album.

It is no small surprise that the song harks back to the sounds that Hotline and Zia made – danceable synthpop infused with township jive sensibilities and an obligatory blast on the sax (courtesy of Mike Faure). ‘Dancing In The Moonlight’ does not have to be taken literally. You can dance to it at any time of day or night as that is what it was made for. It bounces along, toe a-tapping and bodies a-swaying, with a joie de vivre that has party written all over it. It is not too dissimilar to Lionel Richie’s ‘Dancing On The Ceiling’ and ‘All Night Long’ except that it was plainly made in Africa and is less clinical and more earthy.

George van Dyk delivers a powerful vocal to this little known gem from a time when the country was changing and this kind of music was beginning to go out of fashion. Perhaps it was released a little too late to have made a major impact on the local charts, but anyone who enjoyed the ethnopop that was produced in South Africa in the mid-eighties should enjoy this laatlammetjie.