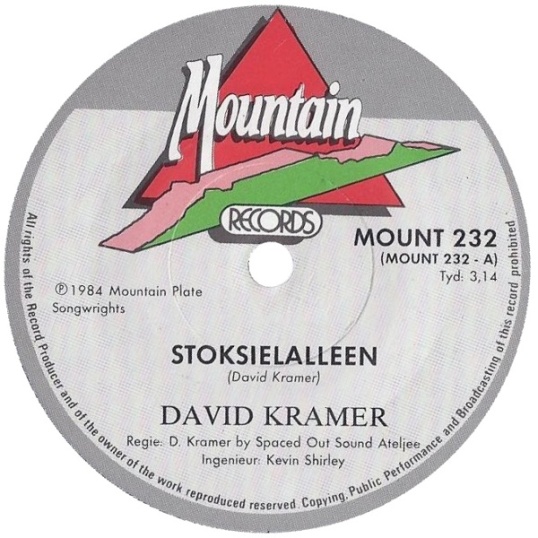 After the runaway success on the Springbok Radio charts of ‘Hak Hom Blokkies’ and ‘Die Royal Hotel’ in 1981, David Kramer struggled to score another top 20 hit despite some strong contenders from his 1982 album ‘Delicious Monster’ (‘Budgie & The Jets’ for example and something like ‘Tommy Dippenaar’ from his 1983 offering ‘Hannepoortpad’). However, in 1984, he was back in the charts with ‘Stoksielallen’ which spent 3 weeks on the Springbok Top 20 and peaked at number 17.

The song relies on a boereorkes sound with accordion and that doem-doem langarm beat which probably accounted for its popularity. Lyrically, Kramer is back to having fun. The song is a long list of all the people he tried to ask out for a jol on a ‘Saterdag aand’ but they all had excuses in great rhyming couplets (“Ek vra vir Tillie, maar Tillie sê sy willie/Miskien wil haar sussie, maar haar sussie issie lussie” and “Eek nooi toe vir rheta, maar rheta sê vergeet maar/En wat nou van tant hessie maar dis buite die kwessie”)

This is the side of Kramer to sit back, tap your feet, chuckle at the rejections he gets and simply enjoy. If you ever find yourself stoksielallen op ‘n Saterdag aand, put this on and take comfort from the fact that you are not alone.

One thought on “Stoksielalleen – David Kramer”