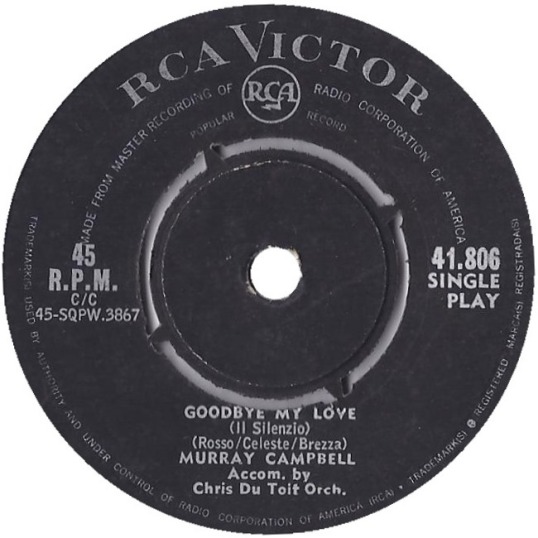 Murray Campbell was a Scotsman who made his home in South Africa. In 1965 he recorded a version of Nino Rosso’s ‘Il Silenzio’ with a short spoken vocal in English and changed the song’s name to ‘Goodbye My Love’ The song topped the Springbok Charts for 6 weeks and also the (then) Rhodesian charts for 8 weeks. He also recorded 2 versions with Virginia Lee singing a vocal, one in English and one in Afrikaans.

The main instrument featured in the song is Campbell’s trumpet which has resonances of ‘The Last Post’. It is a moving piece that would fit in well on an old western soundtrack as the hero moves off from the grave of the woman he has just lost and heads into the sunset. However, the spoken piece tells the story the other way with the male voice saying to his love to kiss him before he goes.

Campbell plays his instrument with a crystal clarity and poignancy that has this haunting piece ringing in your mind long after the notes have faded and you are left in a contemplative mood.