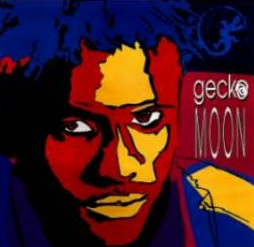 Most internet searches for Gecko Moon lead you to Bed & Breakfast places in South Africa. But one link will take you to The South African Rock Encyclopedia page for the only vinyl offering from this South African group. The band was formed by Ringo Madlingozi and Alan Cameron who had been together in a group called Peto.

‘Green Green’ is the opening track on the album and is a light, bouncy and decided catchy tune. It has an easy going reggae beat to it that sits somewhere between UB40 and a township. It is the latter influence that meant it didn’t get too much success on the white radio stations, but given the numerous other “cross-over” successes we saw in the 80s it is a bit of a mystery why this one did not get the exposure it deserved.

This song was not available on CD for a long time, eventually surfacing on the Gallo records ‘SA Party’ compilation, so now you can enjoy it in digital quality, but it is still worth getting your hands dirty and seeking out the old vinyl album ‘Gecko Moon’ for some other tasty treats from then and, if you like the sound of Ringo’s vocals, you can find some of his solo stuff on CD.