The Villagers Theme – Mick Jade (A gold nugget this one) 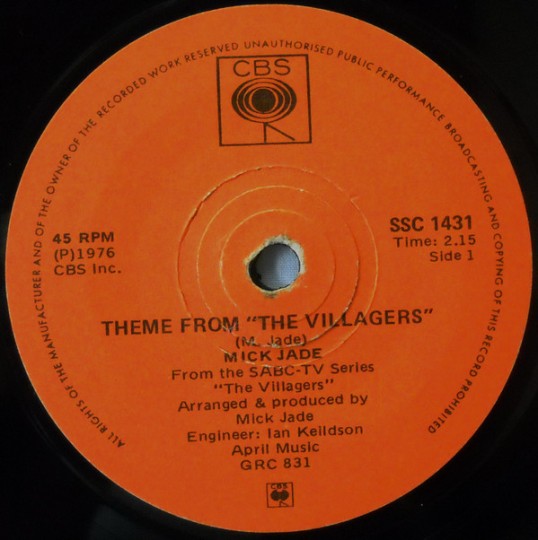 Those of us old enough to remember the early days of television in South Africa will well remember the locally produced drama, The Villagers. Names like Ted Dixon, Hilton McCrae, Buller Wilmot and Chesa Labuschange were part of our lives back then. As was the theme song with its distinctive harmonica intro followed swiftly by Mick’s gruff vocals telling us that ‘The Village Reef is their home, built on a pile of gold, and for the young and the old life and work just carry on.’

The TV show followed the lives and fortunes of a mining community which was quite close to the hearts of many in the country. The interesting thing is that Jade’s theme sounds almost like it could be the theme tune for an American gold rush show. It has that sort of honky tonk feel that one associates with that genre.

While the TV show itself was massive, the theme tune didn’t dent the local charts and Mick Jade went on to write other theme tunes for TV (‘Spectrum’ and ‘The Diggers’) as well as having writing Sean Fury’s ‘The Scheme Of Things’ which appeared on the first ‘Sidney Sessions’ album. The burning question is (and perhaps someone out there can help) is who was responsible for the harmonica on the track?

Where to find it:
Singles bins at second hand shops

Ted Dixon and Nick Wilmot (if memory serves me correctly) are in the bar with the regulars looking on.

Nick: Hey Ted, what’s a cannibal’s phone number?
Ted: Which cannibal?
Nick: Ag, I dunno, any cannibal.
Ted: I dunno
Nick: One ou ate one ou
(General laughter)
Ted (thinks for a bit, then smiles): Oh, you guys are trying to trick me, cannibals don’t have telephones.